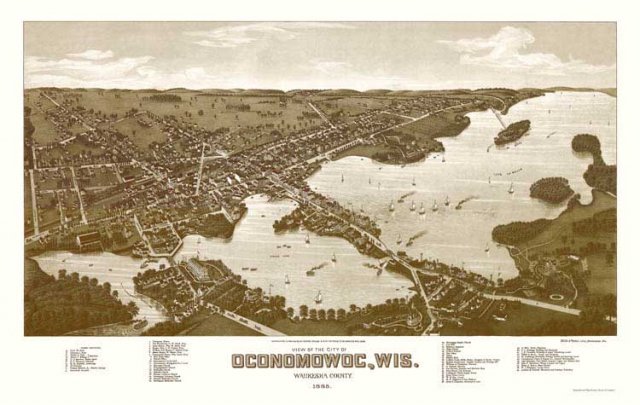 You don't have to go back hundreds of years to discover why the Oconomowoc area was settled - the reasons are still here.

It was the area's abundant natural resources that attracted its first recorded settlers, members of the Potowatomi and Winnebago tribes. Deep woodlands and clear lakes provided the tribes with wild game, fish, and the raw materials to build their tools and homes. It was they who named the area "Coo-no-mo-wauk," or "Where the waters meet."

The first white settlers were Charles Sheldon and Phil Brewer, who in 1837, built log cabins in the area. The pair was soon followed by other settlers lured by stories of the area's beauty and abundant resources. Early settler John S. Rockwell was responsible for establishing a great deal of the town's foundation. The young entrepreneur built a grist mill and established the town's first store, hotel, fire department, and library. The "Father of Oconomowoc," as he came to be known, also donated land for the community's churches and started Bord du Lac, a women's seminary.

Oconomowoc was incorporated as city in 1875, and by 1875 its population had grown to almost
3,000. Following the arrival of the railroad, Oconomowoc became a favorite summer retreat of tourists and wealthy vacationers from Chicago, Milwaukee, St. Louis, and other Midwestern cities. Some of the nation's wealthiest families built stately summer homes on the lakes, and by the 1880s Oconomowoc featured 6 luxury resorts. From the 1870s until the Great Depression, Oconomowoc was known as the "Newport of the West," and visits by Presidents Cleveland, Harrison, Grant, Taft, Coolidge, McKinley, and Theodore Roosevelt earned Main Street the nickname, "Avenue of the presidents."

The area also attracted new businesses, such as the Carnation Company, Brownberry Ovens, and the Oconomowoc Canning Company. Pabst Farms became internationally known for its purebred livestock. Oconomowoc's downtown has retained most of its historic 19th century architecture, and numerous grand Victorian homes still grace area lakeshores. Many city homes and businesses are listed on the state and national Register of Historic Places and can be seen on a self-guided historic walking tour developed by the Oconomowoc Historical Society.

The Oconomowoc and Lake Country Museum, located in Oconomowoc, recounts local history with a number of artifacts and exhibits. The museum’s Streets of Old Gallery features displays of a turn of the century Victorian home, dentist office, barbershop, print shop, medical clinic, bank, and John S.Rockwell’s general store. Ole Evinrude, an Oconomowoc resident who invented the outboard boat motor in 1907, is the focus of an exhibit of early boat motors. Another Oconomowoc claim to fame is its setting for the 1939 premier showing of the movie, “The Wizard of Oz.”

The only thing brighter than the Oconomowoc area's past is its future!